Sid
It’s that Mugabe that’s to blame like. Oh Aye, that bugger and his power hungry ways. That’s why we cannit get a cheap pint in here any more. I saw it on the news last neet that the knacker’s driven that many farmers out of business in Zimbabwe that ye cannit get a loaf of bread ower there for less than ten million poond or summat.
So, I was talking to Knocker like, ye kna Knocker man his dad’s an ex-pitman and his mam was a land girl, you dee man he sells them Viagras on a Friday night to the lads with the droop at closing time? Anyways I was talking to him aboot it and he reckons, and this is gospel cos he heard it at Morrisons on Shields Road off that bloke who’s in the TA and he knas a couple of the special squad who’ve been parachuted into Africa a couple of times, he reckons that this means the price of yeast has went right up roond the world and all.
That’s why the brewery has put the price of special up to seventy eight pence, SEVENTY EIGHT Pence you kna, I’m a bloody pensioner me. It’s disgusting it is. I’ll have to turn the heating doon again if I want to keep drinking.
Aye it’s all that Mugabe’s fault the bastard – nee wonder they want him oot! 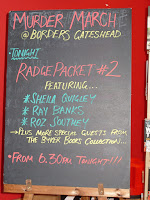 Sad news reached me at Byker Towers last week regarding the passing of my friend Sheila Quigley. She helped massively in the establishing of Byker Books and the Radgepacket series when, as an established and successful, author she really didn't need to. She badgered shops to stock our books and host our launches (and make sure we got paid!) She shared her contacts and also, crucially, gave this council-estate hobo the encouragement (and occasional kick up the arse!) to try something out of his comfort zone and I'll always be grateful.  Rest easy mate, you'll be greatly missed. Rivs

I started Byker Books back in 2008 with a vague notion of publishing the working class lads and lasses who weren't taken seriously by the big publishers or agents. The people who didn't have degrees in 'creative writing' but had crap jobs that sapped their souls instead, the people who didn't have a 'journey' to bore people to death with but did have an idea for a bloody good story that other people from the estates would enjoy, the people who didn't get glowing reports at their great schools but instead had to battle their siblings for the one pen in the house to write anything down before doing their paper round in the rain. That's who Byker Books was for. People like me.

BookD I recently posted on my Facebook page about a section in BookD for blogs about Harrogate 2016. Well, I liked the idea so much that I've decided to make it a regular thing and am aiming to have a 'Top Blogs' section in the paper every week. I've stuck a press release out inviting bloggers to let me know of their interest but would like to offer you lot ('cos you're my people man!) the chance to be top of the list. I'm anticipating featuring selected posts from around five per week so if you fancy it then either email me at ed@bykerbooks.co.uk, comment in this post or just follow my blog and I'll check you out (mainly so I can put you in a handy file and not forget..hey ho!) This is entirely FREE, no advertising charges at all for you to be in the nations premier digital books mag - I only ask that when featured you blog about it as well, that's fair isn't it? Right, have a look at BookD ask yourself if you'd like t