on June 17, 2015
I've taken a bit of time off from writing recently (First rule of being me - I do what I want!) and was away last weekend - 'The Lads' and I meet up two or three times a year for a 'Big Boys Beano' in a different city and relive our youth by getting pissed and going to indie clubs...then moaning about it for a week after - at the magnificent Stone Roses Bar in Leeds.

I really should have dropped in on the excellent Armley Press but, despite them being made for my sweary, dragged up on a rubbish tip kind of style I haven't actually got anything new to submit to them...yet! You should have a look though.

Anyway, as we were milling round the VIP area (£10 - you get your own bouncer, your own space at the bar, your own roped off alcove and free drinks on arrival - bargain. It would cost you a fiver to get in anyway so there's a tip for you if you're ever in the area) and hoying ourselves about to The Courteeners et al I realised that not only was I the coolest person in there, nor even the best dancer but I was also probably the oldest...hard to believe I know when you're looking at my profile pic eh?

I put it to the back of my mind and worked on making my hangover a good one (it was a fucking belter by the way!) and have only really considered it again this week. The concept of time fascinates me - I mean it seems to take ages doesn't it? You start your eight hours shift in the factory or warehouse and it seems endless but I'm forty-five in a few weeks and the last thing I remember is going out on my eighteenth birthday...what the fuck happened there then Father Time you cheating bastard eh?

I've probably only got thirty or forty good years left (if I'm lucky!) and I've realised that my current output of books just isn't enough. I'll be furious with myself if my next moment of clarity sees me in my seventies and still not having fulfilled the potential I know I've got. This applies to you lot as well like - I know I'm not the only lazy bugger round here!

So I'm getting on with it - there'll still be pints and yobbish behaviour like, too old to change now! - the next novel's plotted and ready to rock and I've got a couple more half-planned as well a completely different series in mind. 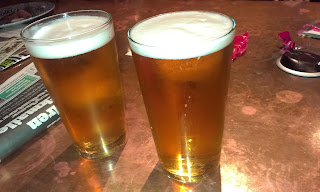