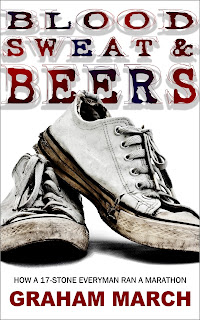 I became a publisher purely because the mainstream big boys didn't want my books (vampires were all the rage at the time and they couldn't see past pointy teeth and bland, carboard cut-out, personalityless victims/lovers - and there was no way I was setting a book in Sunderland!) So when I see something I like I just publish it - no managers to pitch it to, no shareholders to appease and no retail buyers to arse lick. When I read 'Blood, Sweat and Beers' by the mighty Graham March (mighty? He was seventeen fucking stone!) I decided to publish and I'm glad i did. read on to find out why Graham wrote it and you'll be glad I published it as well - particularly as it's currently on 99p on ya kindle!


Graham March on the writing of 'Blood, Sweat and Beers'