There's a point in Byker (that's the very real estate in Newcastle where I'm from and there isn't so much of a hint of a fucking grove there...) where, just between the sixties council flats and the Legoland maisonettes, you catch a glimpse of the Newcastle and Gateshead quayside. Perched high on the very banks of the mighty Tyne you can see the sun reflecting off the shimmering, silvery Sage, the solid, northern majesty of the former Baltic flour mill turned contemporary art must-see and the bridges...God those bridges! They bring a shiver to the spine and a lump to the throat. If Byker was a nice place, a suburban middle-class area perhaps, then property developers would be fighting each other bare-knuckled and bare-chested to spend billions here based on that view alone.  Sadly though its not, and before hundreds of millions of pounds were spent on re-developing what was once described as "a rat-infested swamp" into “one of the most stunning river fronts in the UK” you probably wouldn't have noticed the view.
The thing is though, the quayside was always brilliant...just in a different way.

As a teenager back in the eighties the Quayside was a dark, almost gothic, place, that to me, was a world away from the mentalness of the Bigg Market just up the road. The pubs were populated by students and ‘alternatives’ as well as the muso types and the odd ‘trendy’.
The Baltic was just another dilapidated warehouse and there was simply cold, brownish, water where the gorgeous Millenium Bridge now leads to you to it.
If you wanted live music you would head to ‘The Riverside’ (set up as a left-wing co-operative but ironically funded with a start-up grant from Thatchers government of the day!) and catch unknowns like The Stone Roses, Happy Mondays, Pearl Jam, Sonic Youth, Billy Bragg and some bloke named Bowie to name a few - there was also a memorable night when renowned Geordie hater Noel Gallagher was headbutted on stage by a local radgy whilst his famously ‘hard’ younger brother kept well out of the way. Or along the road,  you could queue up for ‘The Tube’ at the Tyne-Tees studios to leer at a young Paula Yates and try not to piss security off too much.
The Riverside also had a thriving dance scene in the early nineties and beyond - hosting the famous Scott Bradford ‘Shindig’ nights - my own personal favourite being ‘The Bing-Bong’, who worried about getting up for work back then man!
Set back from the Quayside a bit was ‘The Ouseburn’ area - again a run-down patch of crumbling buildings - headed by ‘The Cluny’ whisky warehouse, a redundant, decrepit remnant of when Newcastle was thriving. This was where the parties happened when acid house - and everything that came with it - hit the Toon. Strangely, the police were the only people in the area who didn’t know about it, which was handy. The Cluny is now an ultra-cool music venue, surrounded (ish) by some excellent music heavy bars and a few minutes walk from the famous (in Newcastle anyway) ‘Free Trade Inn. Always a starting point back in the day, mainly for it’s free jukebox, before moseying on down to Flynns on the Quayside itself to get the knockback from every girl in the place - happy days!
The Ouseburn was also where hundreds of pigeon crees got re-sited from the sexy new Quayside when the Tyne-Wear Development Corporation decided that they didn’t fit the new image.
Over the water, on the Gateshead side, there was the famous ‘Tuxedo Princess’ (and briefly ‘Tuxedo Royale’) much patronised by footballers, actors and general famous people. Newcastle legend Mick Quinn got turned down by Miss World on ‘The Boat’ - he is a scouser though! - and some unknown singer named ‘Tweedy’ used to work there. It was mostly known locally though for the revolving dance floor that resulted in many a drunken Geordie being off work sick with twisted ankles and broken legs - not me though...I didn’t have a job!
It’s easy to look back at how things were down there with a critical eye, and I’d be the first to accept that the development of the Newcastle and Gateshead Quayside has been excellent from both an aesthetic and commercial view, but there’s a little part of me that wants to feel ripped off at paying £1 a bottle for Holsten Pils on the third floor of Flynns whilst looking out of the window and across the Tyne at the multi-storey carpark in gateshead that the fat bloke off Coronation Street got thrown off in ‘Get Carter’ before getting told to fuck off by some studenty girl dressed in black.
The Quayside now is an almost European experience - albeit a cold one - and is as vibrant, entertaining and happening as anywhere else you could think of or will ever go, but to my mind it always was anyway.
Mind you, what’s on show in the Baltic is better than the ‘art’ we used to create down there...maybe some things have changed for the better!
Rivs 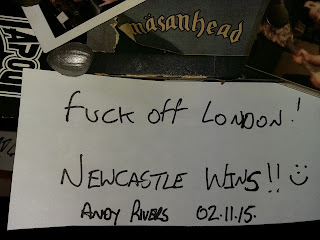