Alreet, I learnt some time ago that it's pointless worrying about things you can't change. Whatever you're stressed about now you probably won't even remember in as little as twelve months. For instance this time last year the biggest problem in my life was I needed a root canal doing! It took over my life to the point I couldn't concentrate on anything else - at the time I thought it was the worst thing in the world...you live and learn eh. 😁

I started chemotherapy on 24th November and, as I write this, I'm now into my second cycle and I won't lie to you, I feel a bit shit but I'll do a post on the whole chemo experience early next year I think. 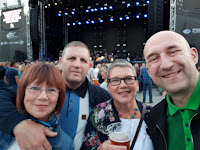 2021 was a bad year for me on the whole for loads of reasons (the main one starting with C like...) but I'm a a fairly positive person and there was a lot of good shit happened this year as well. I managed to see one of my favourite bands the Stereophonics live again at a cracking venue (Scarborough Open Air Theatre) and had a great night, saw acts like Sarah Millican and Jason Manford basically play round the corner from me at Brid Spa, Mike 'The fat Parasite' Ashley finally fucked off from my club and my city and, just before starting my treatment, I got back to Scarborough to watch the mighty Duran Duran play a belting set. I had a bit of a moment when they played 'Ordinary World' as my wife held my hand and my resolve to keep loving my life was further strengthened. Indeed last weekend I stood on a clifftop in the fresh air and watched a colony of seals just doing their thing on the beach, it was mint and all I needed that day. 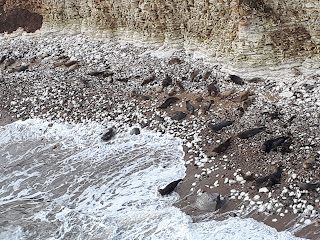 I've also started writing a bit again (maybe not such good news for you lot! 😂), watched loads of films (caught right up with the Marvel stuff) and have been genuinely touched by the messages of support I've received and the people who are checking on me regularly. I'm still really very surprised people still read my blog as well as I only did this for me to look back on when I'm a Booker prize winner in a couple of years and drinking champagne on my sold gold yacht.

So, with that in mind, I just want to say to you all, enjoy your festive period, knock back the drinks, have a laugh with your family and friends and get stuck into all the delicious food...unless you need a root canal doing obviously then you're in trouble! 😁

Tomorrow is never promised so grab today and squeeze all the fun out of it you can.

Have a great Christmas and I'll see you all next year