I thought I'd find this one hard to write. I knew from the very start I'd have to do it but I still reckoned I'd struggle opening up about this when we got this far...here goes...

Just for context I grew up on an arse-end council estate (Byker - nee fucking grove there like!) in Newcastle in the 70's & 80's. It was rougher than an explosion in a sandpaper factory and if like me you didn't have a dad then you lived on your wits. The first thing I learned was to never, ever show any weakness or you'd be slaughtered. Don't cry, don't look bothered about anything or anyone, don't ever show fear and most importantly, don't ever be different. I mastered all those things early and have taken them successfully with me through life (mind you I still had loads of fights, mouthy little brothers are handy for that! 😄) well, up until now...

Having had my various scans I was called into an appointment with my consultant for the big one, to 'discuss next steps' - I was heartened by the word 'next' as I reckoned this meant I probably wasn't in any imminent danger of death (and if you've read the above you'll know there was never any chance of me showing any signs of anxiety anyway 😉) so bounced into the office at Scarborough Hospital with my usual 'howay then' mentality.

The news was good, actually Mr Lim my consultant said it was 'excellent', the scans had shown 'No obvious residual tumour' which meant there was next to nothing left of the bastard intruder and is a very rare outcome in cases as advanced as mine (get me - medical marvel and everything! 😁) which lead to the following conversation.

'So I don't need surgery then and this is basically over?'

'It's up to you Mr. Rivers but we discussed your case last week and the consensus from all of us is that you should have the surgery to remove any lingering cells because if you don't there's a greater chance it'll come back and if it does it'll be far more aggressive.'

I took that to mean it will definitely come back and when it does you'll be older and you'll be fucked son.

Still quite chirpy...and then we went through the various potential complications and side-effects that could arise. One of which had the potential to be life-altering.

I won't go into the full ins and outs of it but I'm very probably going to wake up from the surgery with a form of colostomy bag. Depending on how it goes it may be temporary or it may be permanent. 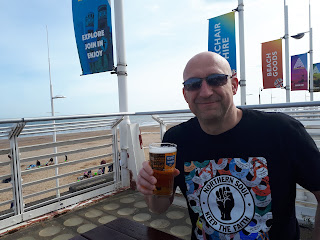 So there you go, if you've got this far then I've just shown a weakness or a difference and I know I'll get slaughtered for it both to my face and behind my back. I'll hear the jokes about a 'bag for life' or be called a 'shit-bag' over and over again. It would have bothered me not that long ago but as I said at the start I couldn't give a fuck now. My main aim at the very start of this journey was to keep breathing and anything else was a bonus, so give me your worst and I'll take it all with a smile as I enjoy my life.

Well, unless you go too far then I'll slap you daft and empty my bag of shit over your fucking head 😂