The First Cut Is The Deepest: The Cancer Diaries Pt 11

If you've read any of this old toffee I've been writing during my journey through cancerville (particularly the last one - The Beat Goes On) then you'll know that I was being booked in for bowel surgery soon - well that day is fast approaching as I'll be going into York Hospital on 6th June at 07.30 to be sliced and diced by the consultant who performed my colonoscopy all those months ago. With my usual shrugged shoulder approach to details I'd assumed this wouldn't be a big deal and I'd be in and out probably the next day with a kick up the arse and a flea in my ear about seeing the GP sooner if there was a next time.

Turns out I was wrong...as ever!

I had a days pre-op down at York last week which involved various tests, including a fitness one (apparently I'm canny fit...try to stay calm ladies...😄) which all informed the view that I'm a 'Low Risk' for this kind of surgery. ' 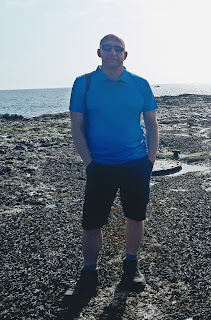 What does that mean Rivs?' I hear you ask. Well, I'll tell you. It means, apparently, that there's only a very low chance that I'll die during the Op...😟

After this little gem I was handed over to various research nurses who signed me up to different projects and procedures that will help other patients in the future 'cos I'm a really nice and selfless bloke...not 'cos I'm trying to win karma points to avoid the aforementioned dying thing...oh no not me...

And then the big one, the top nurse who ran the admission ward came in with a big carrier bag of medication, tasks and diet requirements for me prior to the surgery. I've attached a photo of them and the eagle-eyed amongst you will notice that not only do I now possess a lot of medication but I'm now the proud owner of my own sharps bin...yup, as well as necking pills like a 90's raver (hold on a minute...) I've also got to fucking inject myself with something the night before! I'm basically a doctor now 😉 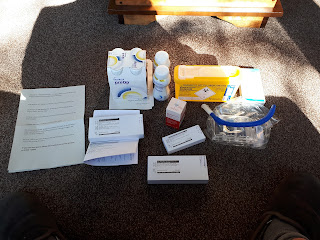 Taking all this in my stride (not really!) I then casually asked how long I'd be in hospital, thinking again that I'd maybe bring a book in to be on the safe side in case I wasn't discharged until late afternoon on the next day. The reply of 'Oh, it'll be around a week to ten days' threw me a little bit as the realisation slowly began to dawn on me that this might not be quite the walk in the park I assumed it would be. Then I got given a prescription for even more medication to collect at the pharmacy downstairs and was kicked out with a cheery 'see you on the 6th' as I made my way out feeling very discombobulated by it all.

In Trainspotting, one of my favourite ever books, one of the main characters explains how being a heroin addict means you don't have to worry about anything else. All of life's chores and worries simply disappear to be replaced by one main goal - just getting more smack. I've found having cancer to be a little bit like that, all through my treatment I've simply focused on getting through the next ten minutes, the next half hour or the rest of the day and never looked further than that or bothered myself too much with any other normal everyday stuff.

I remembered this as I found myself with two and a bit weeks to kill before the surgery and a lot of spare time for me to get more anxious and panicky about it but then, as luck would have it, I discovered the dishwasher was leaking in the kitchen and probably had been for some time! This means that I've basically spent the last seven days trying to get a fucking plumber to sort it and as you'll all know actually getting any kind of tradesman to turn up and do something is a full time job in itself so I've not really had time to dwell on it that much! 😂

Anyway, to conclude, I'm going in a week on Monday and I'll (hopefully!) be out a week later minus some bowel and plus a natty little bag. I'm not looking forward to it and I am a bit scared BUT eight months ago I had a stage three tumour surrounded by nodes that were ready to fire the bastard off around my vital organs to finish me off and I would have absolutely took this scenario if offered then.

My main aim last summer was to keep breathing, I've managed it so far and I'm nearly at the end of this now so fuck it - let's gan! 🥊🥊